On reflection the location was very good, and it was probably me having an off day due to the amount of Yorkshire Ale I had drunk the night before
Images of High Force
Frozen Dales
17/01/2020
The next location i visited in the Dales was on the afternoon of the second day and this was Stainforth Force, a stepped waterfall which is on the river Ribble, just west of Stainforth Village. This particular waterfall also has a very narrow Packhorse Bridge a few hundred metres upstream from it, which in itself has photographic potential.
This afternoon visit was not very successful, firstly because the whole river bank was lined with people who had arrived on a coach and secondly as it had been rain for several days before, which meant the water was going over the falls like a thundering rocket.
As i walked away i made my mind up to return early the next morning and notice that there were a couple of parking spots just on the side of the Packhorse Bridge which I could use if early.

Returning the next morning I parked very near the falls just over the packhorse bridge. The morning was frosty, but the falls were at least completely deserted.

For some reason this location I found to be a challenge in terms of composition, the exposed limestone steps make a multitude of images possible, but I found it difficult to set the waterfall at its best within the imposing limestone foreground.


I must say however the trees running along the river Ribble were in their full autumn colour and thus presented an acceptable backdrop to the waterfall.
Interestingly you will note that someone from the day before had left a pair of children’s blue wellington boots on the limestone.

On reflection the location was very good, and it was probably me having an off day due to the amount of Yorkshire Ale I had drunk the night before, which when on a solo photo trip tends to be my modus operandi, but I enjoy it. 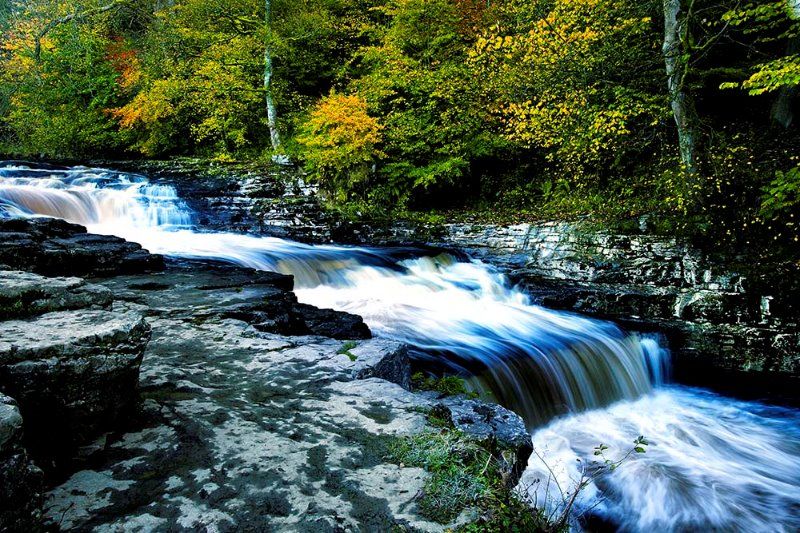